the murder of roger ackroyd 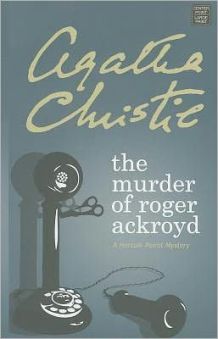 Agatha Christie is the master of the mystery novel. In The Murder of Roger Ackroyd she delivers another brilliantly clever plot told in subtle, succinct prose that leads you down every garden path on the way to the surprising resolution. I read this one because it made #1 on the Guardian list of the best Christie novels. It lived up to the billing.

The Little Sister is all atmosphere and attitude. Chandler’s protagonist, Phillip Marlowe, more observes the action than drives it forward. He is pessimistic and tired, even as he cracks wise at any opportunity. Women throw themselves at him, but he can’t seem to marshal the energy to do more than kiss them once or twice and keep up the banter. He’s a step behind every murder, and the loosely knit plot keeps the reader feeling even further behind. (I repeatedly found myself looking back in the book to see what I’d missed, only to realize that I didn’t miss anything; the details weren’t there to notice.)

At the same time, having just read The Maltese Falcon, it was hard for me not to notice that many of the plot devices were similar. If, as some commentators suggest, Little Sister is partly a response to Chandler’s experience in the movie business, I think it’s also paying homage to Hammett’s classic. 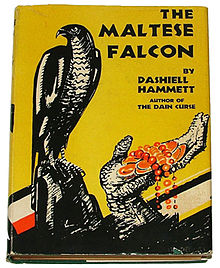 Dashiell Hammett tells this classic story in terse, punchy sentences that take the reader around San Francisco and through a twisty plot with Sam Spade, private eye. Spade is worldly, jaded, at times childish, and always chauvinistic. Despite his shortcomings, his ability to assess people and their motivations is remarkable, his insights and intuitions not perfect, but close enough to do the job. In the end we see that, for Hammett, Spade’s flaws are reflections of the world in which he lives.

It took me a long time to read Have His Carcase. Sayers’ detailed style is, perhaps, a little slow for the contemporary ear. On the other hand, it speaks to the real pace of most police work. They laboriously check every lead, slowly eliminating possibilities till they narrow it down to the real killer. It’s not exciting, but it is satisfying because it works.

trouble is my business

Philip Marlowe, Raymond Chandler’s most famous character, is something of a mystery. He muddles his way through investigations, doing his best to make sense of an unfair and world, but what we know about Marlowe the man fits in an ash tray in a two-bit bar somewhere in the L.A. basin. Trouble Is My Business pulls together four stories that, read together, uncover some of Marlowe’s character.

In the title story, Marlowe is hired to reveal the gold-digging nature of a woman chasing a rich man’s son. Though he doesn’t trust her, he’s also sympathetic to a woman trying to survive in a complicated world — and by the end things get way more complicated than they first appeared. In the second story, Marlowe agrees to help a friend make a little money using a quasi-legitimate scheme. His friend ends up dead and Marlowe’s framed for the murder. The third story sees Marlowe working with another friend, this time a woman on the trail of some insurance money for stolen pearls. Finally, in “Red Wind,” on impulse he helps a woman escape the police and ends up shielding her from her dead lover’s perfidy.

The moral code that emerges from these vignettes is one that says you do a lot for friends — even when it sounds like a bad idea. It assumes women are innocent or at least deserving of protection, never asks for more than fair compensation, and often gets less. Sometimes Marlowe’s pronouncements clang against modern ears, but I don’t think he (or Chandler) cares. He lives his life as he sees fit and expects no sympathy.

The Maxie family is English, landed, and cash-poor. The son works as a doctor in London. The daughter is divorced and living at home with her mother. Together with a long-faithful servant, they can barely keep up the house and nurse the invalid father, near death. When they hire an unwed mother with an infant son and some attitude above her station, it’s not hard to see who will die. Who did it is another story.

With more red herrings than a fish market and P. D. James’ cheeky, understated prose, it’s a pleasure to read. If, in the end, she implies that the victim is to blame, I put that down to a previous generation’s sensibility (the novel was published in 1962) and the class differences that so often pervade English literature. If you like British mystery shows like Father Brown or Midsomer Murders, you’ll enjoy the book.